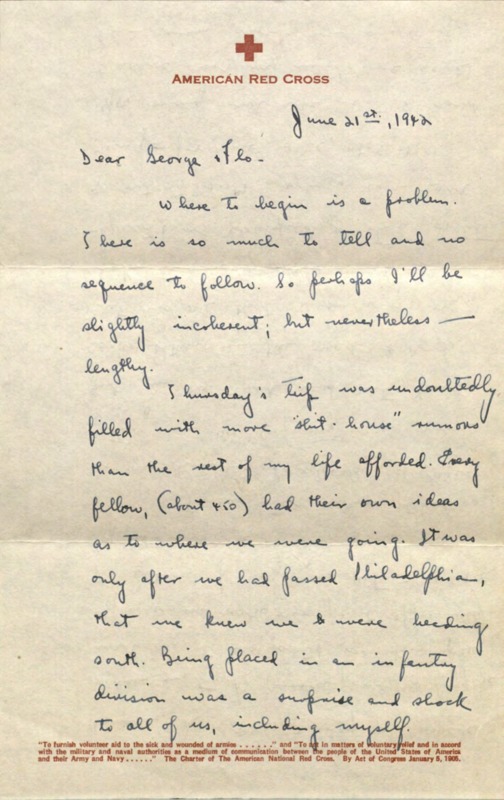 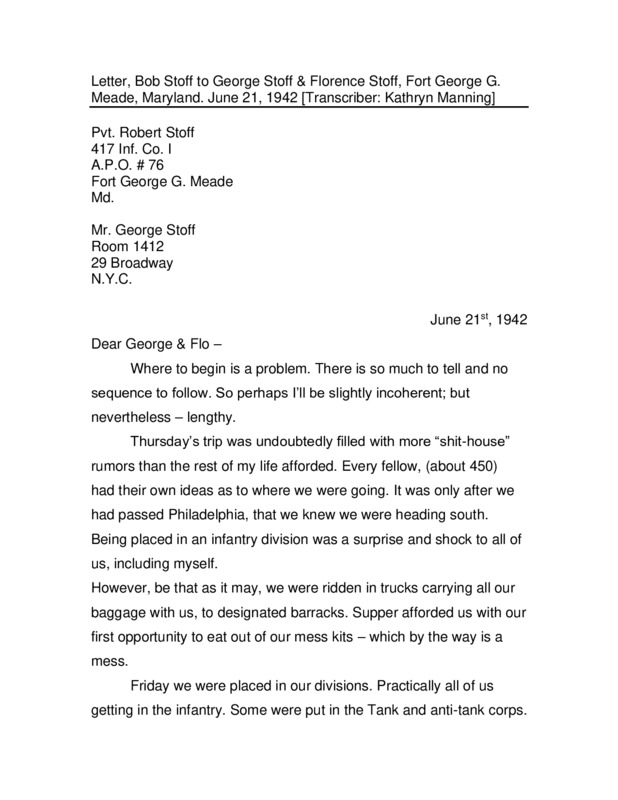 Dear George & Flo –
Where to begin is a problem. There is so much to tell and no sequence to follow. So perhaps I’ll be slightly incoherent; but nevertheless – lengthy.

Thursday’s trip was undoubtedly filled with more “shit-house” rumors than the rest of my life afforded. Every fellow, (about 450) had their own ideas as to where we were going. It was only after we had passed Philadelphia, that we knew we were heading south. Being placed in an infantry division was a surprise and shock to all of us, including myself.
However, be that as it may, we were ridden in trucks carrying all our baggage with us, to designated barracks. Supper afforded us with our first opportunity to eat out of our mess kits – which by the way is a mess.

Friday we were placed in our divisions. Practically all of us getting in the infantry. Some were put in the Tank and anti-tank corps. Others in the medical corps. But no one that I know of, or spoke to, was placed in their requested or qualified position. Lights so out at 9: P: M; which is a good thing- for we rise at 5: A: M: Upon rising, we are not allowed to leave our beds until we have been given short-arm inspection.

After short-arm we dress and eat. Eats, by the way, have been very good so far. After chow we make up our beds. Then we assemble for whatever they have in mind for us to do. Today we saw movies about sex and personal hygiene. After which we had some drilling. This preceded the issuing of our rifles (Garands) and foot-lockers. From doing all this nothing-at-all, most of us retire exactly at 9:P:M:

Saturday, - this is the day. After chow, we exercised. Crude - but effective. Deep knee bends and stuff – the usual run. Then we had a class (lasting an hour) on how to care for our equipment. After which, we started washing the grease off our guns; but this procedure was halted by a second lieutenant, who decided we had to police the grounds. (Pick up off the ground, that which doesn’t grow, or belong there) Then, we were through for the day; except for a demonstration of how to hang your clothes, and assemble your clothes in military manner in the foot locker. After doing all this, and my laundry, it was about 7: P:M. – Boom! Then it started. New paragraph.

When I started my laundry I put my 2 rings and wrist watch in my pants’ pockets, which I wore throughout my washing.

After hanging my laundry, I took some stationary to the “day room” to write some letters. Then it started. My eyes! I couldn’t stand it any longer. I just had to rub them; but I mean rub them. It didn’t take 10 minutes for me to realize that I was going nuts. They (eyes) were killing me, worse than they had bothered me, since my induction - and they’ve really been bad. Half the time I’m in a fog. Tired, nervous, annoyed – half blind. You know – I don’t have to tell you how I suffer when they’re really bad. So after a little red tape, I was allowed to go to the dispensary. (I must have first realized at this time that I no longer had my watch. Where it is, God only knows. However, this is superfluous right now. It bothered me anyway.) After waiting about an hour, the doctor came in. A fast examination of my eyes – proved I was an “ambulance” case. Thus was I taken to the main hospital (holds 2100 men) in an ambulance. After another hour or two (by the clock) the doctor from the hospital examined me. This examination sent me to the hospital; where I am now residing.

Today, Sunday, I was examined again. This time, a little more accurately. So far, all the prescription has been hot boric-acid applications; which is futile, as we all ready know from experience. What happens from here is beyond me. All I know is what I hear. And that is, it’s harder to get out of the hospital than it is to get in. I don’t know how long I’ll be here; but my guess is at least a week. In any event, send any letters you may write to the address I gave you. It will be forwarded to me. Possibly a few days late; but I’ll get it – sooner or later. I just had to apply some more boric-acid.

My eyes are much better today. At least all the hard granulation is washed off. Who knows – there may be more to all this than meets the eye.

Aside from this, I feel quite well physically. Mentally I’m all jumbled up. There’s no question about it. I’m not crazy about army life. There’s absolutely no sentimentality shown to any one. Guess I’m too soft.

Please send me some mole-skin when you get around to it. Also, some scotch tape.

Laundry service is still unestablished, and presents somewhat of a problem. However, there’s a tailor here, who alleviates the problem somewhat.

It is impossible for me to even guess when I’ll be back home for a visit. One thing is certain. Furloughs are given very seldom. Usually, not at all. Perhaps 3 day passes will be cut out too. I hope not, I’m aching to get home for a while. This being regimented doesn’t meet with my principles.

George, I’m not reading this letter over. So if perhaps I’ve painted a dark picture, please forgive me.

Things, conditions etc., are really good. It’s all mental. One has to acclimate himself to all this. If you drift – it’s bad.

I only hope something is done about my eyes; for surely I can’t be a fighting man in my present condition. I’m even willing to go to a cooler climate – no matter where it may be. Hope everything is going well with you & Florence. As Ever
Bob
P.S. Read some of this letter to Mom & Pop.