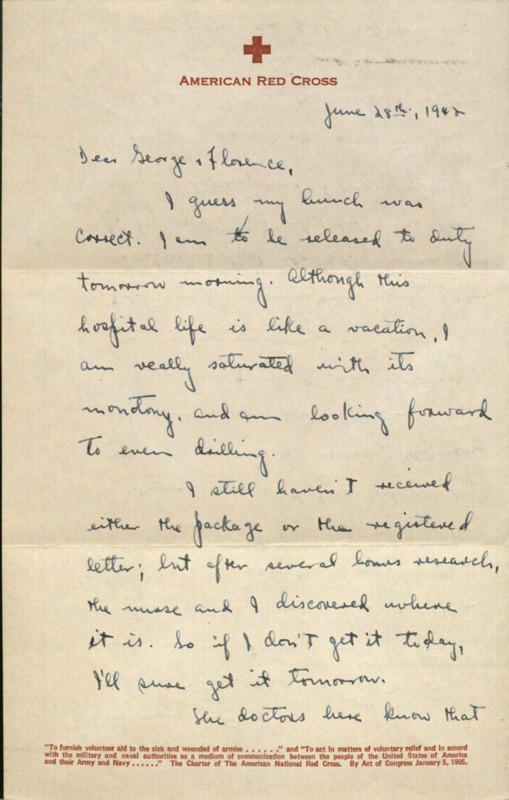 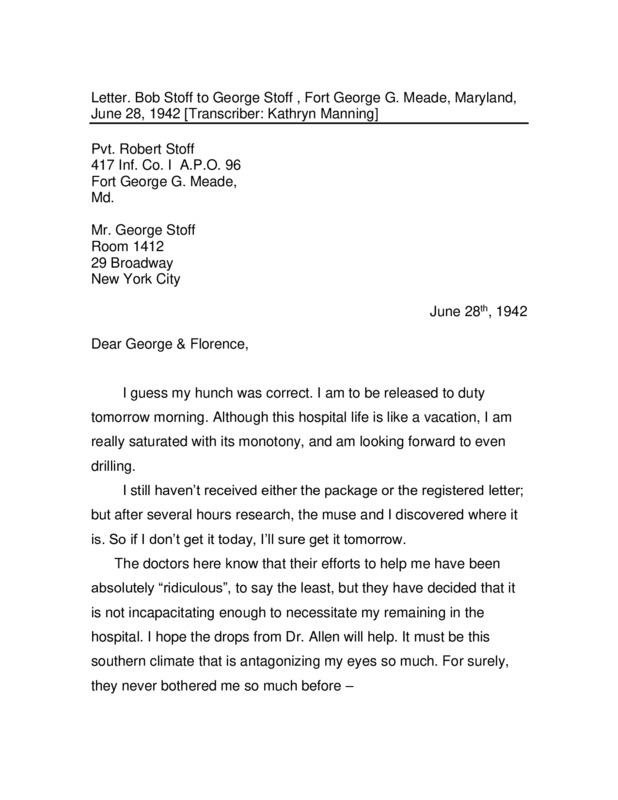 Dear George & Florence,
I guess my hunch was correct. I am to be released to duty tomorrow morning. Although this hospital life is like a vacation, I am really saturated with its monotony, and am looking forward to even drilling.

I still haven’t received either the package or the registered letter; but after several hours research, the muse and I discovered where it is. So if I don’t get it today, I’ll sure get it tomorrow.

The doctors here know that their efforts to help me have been absolutely “ridiculous”, to say the least, but they have decided that it is not incapacitating enough to necessitate my remaining in the hospital. I hope the drops from Dr. Allen will help. It must be this southern climate that is antagonizing my eyes so much. For surely, they never bothered me so much before –

In one of your letters, you make mention of the traveling to Meade and back. Fran ascertained that it’s $8 by train, and $5 by bus. That it takes 3 hrs. on way by train, and 6 hrs. by bus. As far as I know, according to the time-table on all the walls around here, it takes 4 hrs. by train from New York to Baltimore.

However, I am sure that Fran was given the right info. For it’s only an hour and a half to Philly from either Baltimore or New York. It is best to go to Baltimore by express and then get off and into a local train that stops at Odenton. From there, a free bus will take you to Meade. Fran lost her job, else I may not have been so insistent that she stay at home this week. But if I can’t get a week-end pass this coming week, I think I’ll have her come down. There are arrangements whereby she can get a free room from the Red Cross; which has a very nice guest house for the visitors. I imagine I won’t be payed (paid) for quite a while; which isn’t at all convenient. Oh well –

This would be quite a trip for Mom and Pop to make. By the way, I failed to mention that getting a room in the Red Cross guest house is very uncertain. Requests are made weeks in advance. However, these are nearby towns where facilities for guests are available. Rooming houses, hotels, etc. Unless Mom & Pop stayed here over the week-end, I feel that such a trip would knock them out for a month. Also, it would be a financial extravaganza. So I wrote them to be a little patient, and perhaps I will be able to be home in the near future.

Other than all this, things are progressing steadily. If the army means I have to be hard, I’ll be hard. One thing is definite physically, I’m in better shape to stand the gaff than most of the other men. Some of them being quite old.

We in the army are all pulling for a second front; but tout a coup, if you know what I mean. My outfit, the 76th, has never seen action in any war; and is not expected to see any this war. As this outfit is just being started, it would necessitate at least 18 months of preparation. You understand of course, that a division is made up of 150,000 to 200,000 men. Thus, starting a division up is quite a hard job. A division is made up of not only infantry, but everything else that goes with it – Coast Artillery, Field Artillery, Engineers, signal corps, etc. So, it’s no wonder we’d all like to see this 2nd front get started.

I was interrupted at the start of the preceding paragraph by what proved to be a delicious lunch. Chicken, butter beans, dressing, cranberry sauce, milk and ice cream. Also, the inevitable mashed potatoes.

Happy to know that Florence is getting along so well.
Once again, thanks for your swell letters –
As Ever –
BoB