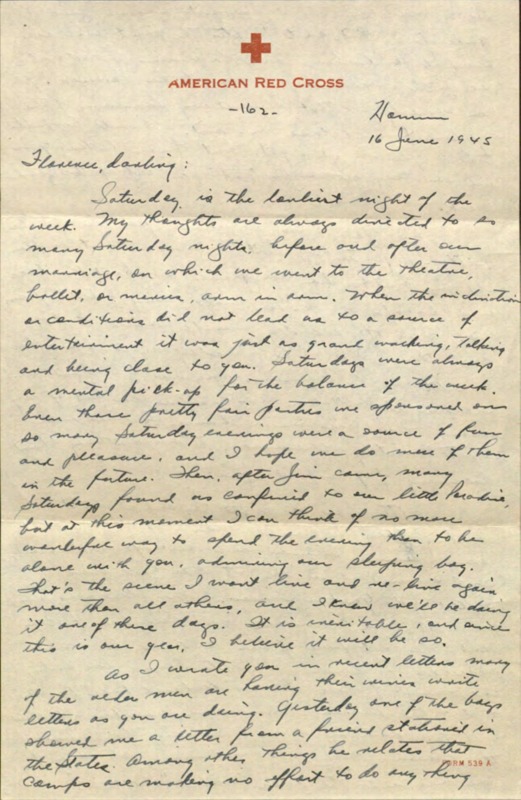 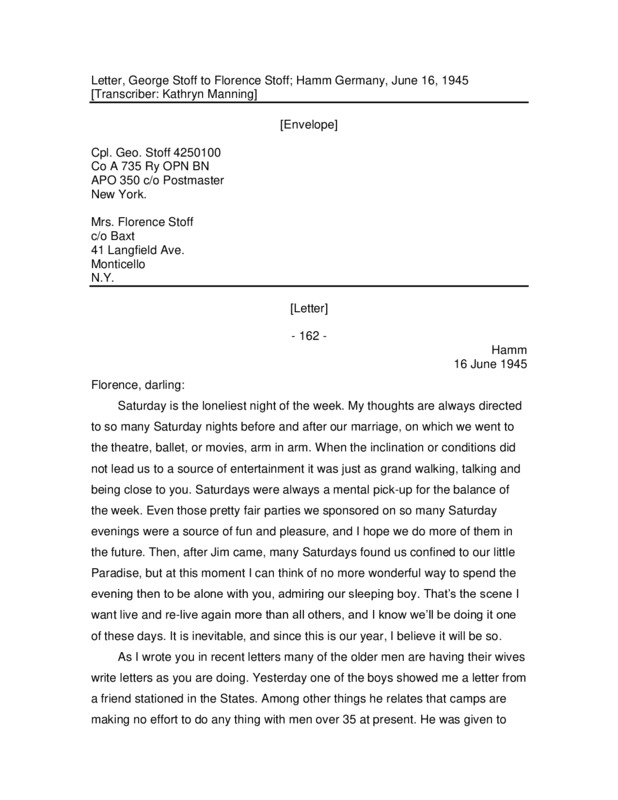 Hamm
16 June 1945
Florence, darling:
Saturday is the loneliest night of the week. My thoughts are always directed to so many Saturday nights before and after our marriage, on which we went to the theatre, ballet, or movies, arm in arm. When the inclination or conditions did not lead us to a source of entertainment it was just as grand walking, talking and being close to you. Saturdays were always a mental pick-up for the balance of the week. Even those pretty fair parties we sponsored on so many Saturday evenings were a source of fun and pleasure, and I hope we do more of them in the future. Then, after Jim came, many Saturdays found us confined to our little Paradise, but at this moment I can think of no more wonderful way to spend the evening then to be alone with you, admiring our sleeping boy. That’s the scene I want live and re-live again more than all others, and I know we’ll be doing it one of these days. It is inevitable, and since this is our year, I believe it will be so.

As I wrote you in recent letters many of the older men are having their wives write letters as you are doing. Yesterday one of the boys showed me a letter from a friend stationed in the States. Among other things he relates that camps are making no effort to do any thing with men over 35 at present. He was given to understand that, quote “After the point men are lined up for discharge, and the process is well under way, the maximum age was to be lowered.” You can readily see that almost any lowering of the age limit will ease me out. It will probably take a few months yet, but those letters you are writing are important, so keep up the good work.

No there was no mail for the whole battalion yesterday, but I guess I can’t complain. The mail situation improved the past few days and perhaps to-morrow will bring a letter from you. I’m off all day Sunday until 5 P.M. and then I’m CQ Sunday night. Since there is little to do evenings anyway, I don’t mind sleeping at battalion headquarters instead of my room. This gives me a chance to read and write quietly all evening, to say nothing about dreaming of you and Jim.

After chow to-night Ray and I went walking along the canal, then a park, inspected some former German anti-aircraft emplacements, and wound up in the GI beer hall now called “The Yankee Tavern.” The place was jammed with GI’s and Townies, and everybody feeling good. We met four of our buddies there and proceeded to drink beer. After paying for only one round of beer it was declared free for the rest of the evening. This always makes a fellow feel like drinking more. During the course of the evening there is a continuous stream of men towards the door marked “POINTERS,” but since there are no women in the place, the door marked “SETTERS” never opens. I kinda like the use of those two words to describe the biological processes that ensue once someone disappears behind those doors. The four piece embittered German band is rapidly learning to play American and English tunes. With the several hundred men equally divided between Americans and English, you find one half singing to a familiar homeland tune, and then the other. The “gemuetlichkeit” is good, the conversation anything from vulgar to thoughts of home, and everyone laughs for a little while. The place closes at 10 P.M. and since it is still light outdoors I made my way back to our billets, about 15 minutes away, in the company of other buddies. This is the first time I’ve been out this late, but have no fear, dearest, I’ll be a good boy and not stay out that late again.

All goes well otherwise. I feel fine and dandy, and sure hope you and Jim are enjoying the summer in the country by now. Since it is getting late, and particularly since I can think of nothing else to write but that “I love you,” I’ll save some words for tomorrow’s letter. The enclosed snaps were all taken in and about the same church. Quite a mess, no.

Kiss Jim for me and I’ll kiss you both in mind with all my love and adoration. Stay well, have fun, and don’t worry, the future will soon be the present we are so anxiously awaiting now. My best to everyone,
As ever,
George