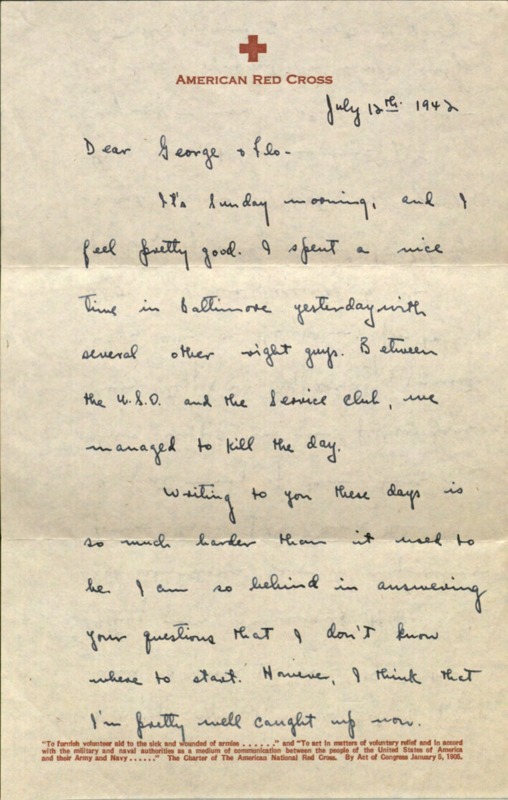 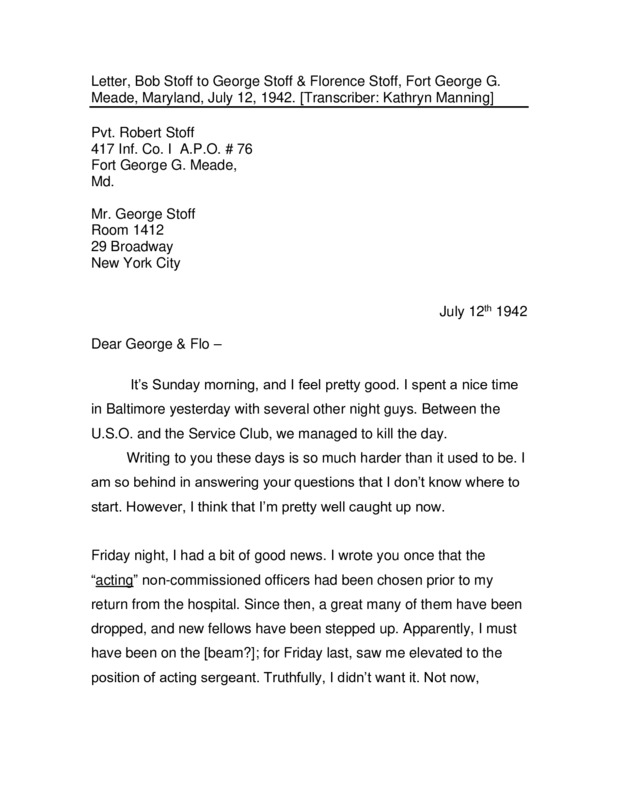 Dear George & Flo –
It’s Sunday morning, and I feel pretty good. I spent a nice time in Baltimore yesterday with several other night guys. Between the U.S.O. and the Service Club, we managed to kill the day.

Writing to you these days is so much harder than it used to be. I am so behind in answering your questions that I don’t know where to start. However, I think that I’m pretty well caught up now.

Friday night, I had a bit of good news. I wrote you once that the “acting” non-commissioned officers had been chosen prior to my return from the hospital. Since then, a great many of them have been dropped, and new fellows have been stepped up. Apparently, I must have been on the [beam?]; for Friday last, saw me elevated to the position of acting sergeant. Truthfully, I didn’t want it. Not now, anyway. As it was, I had no time for myself – now, I shall have even less time. I want the stripes badly; but the amount of work is going to be terrific. I won’t have time to do anything. We are absolutely being worked to death. From 5:A:M; to 4:P:M, it’s nothing but work. From 4 to 5 P:M: we have to shave, shower, clean rifles, change uniforms, and packs and then we are ready to stand retreat. But the acting non-commissioned officers have to go to school before and after retreat, and still do the above. [draws a line with an arrow pointing to “slave, shower, clean rifles….”] So you can readily understand how little time I’m going to have.

A good example of how hard we’re being worked, is the fact that I’ve all ready lost about 12 pounds.

Friday we went through the gas chamber with our gas masks on; but just prior to leaving, we took them off. It sure was something. – only tear-gas; but man oh man! Before going through the gas chamber, we had to walk through a diluted spray of 4 of the deadliest gases – so that we could learn how to determine what gas we are going to be killed by.

A week from tomorrow, we are scheduled to go on the firing range. I hope I do as well as I think I will. From now on, I have to be better than the rest of my squad. At present, most of us are on a par, this makes friction if an acting-officer isn’t at least slightly better than the other fellows.

Being elevated into this, means that I no longer have K.P. or any of the other [crumby?] details. The only detail I can get now is C.Q. (Charge of Quarters) This lasts 24 hours. I only hope and pray that I don’t draw this next week-end. If I’m not on detail next week -end, I’ll be home sometime Saturday.

I got paid Friday and have some money for a change. I’d like to keep this month’s pay so that I can buy a few incidentals. I should be getting another pay the 1st of August, so I should be able to send some dough home.

My eyes are holding up rather well; which is quite a relief.

All told, everything is fine and dandy.
Hope you and Flo are well. –
With a handshake in mind –
BoB