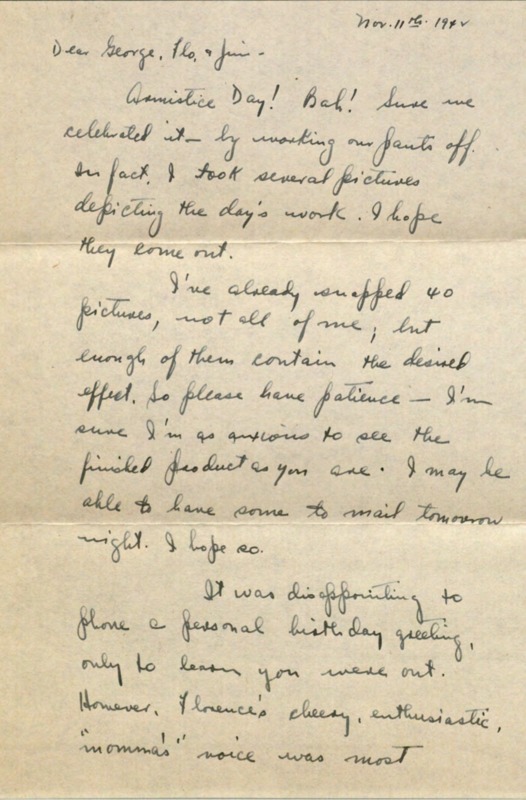 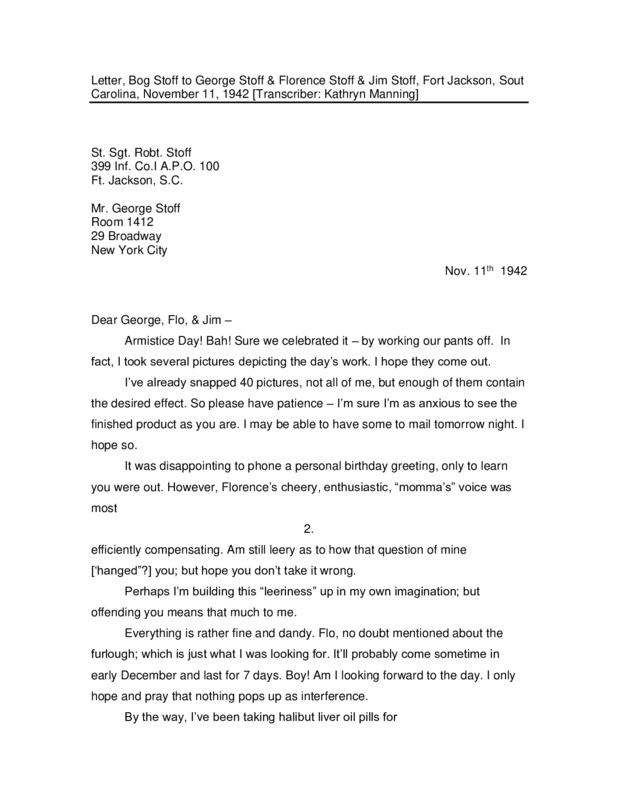 Dear George, Flo, & Jim –
Armistice Day! Bah! Sure we celebrated it – by working our pants off. In fact, I took several pictures depicting the day’s work. I hope they come out.

I’ve already snapped 40 pictures, not all of me, but enough of them contain the desired effect. So please have patience – I’m sure I’m as anxious to see the finished product as you are. I may be able to have some to mail tomorrow night. I hope so.

It was disappointing to phone a personal birthday greeting, only to learn you were out. However, Florence’s cheery, enthusiastic, “momma’s” voice was most efficiently compensating. Am still leery as to how that question of mine “hanged” you; but hope you don’t take it wrong.

Perhaps I’m building this “leeriness” up in my own imagination; but offending you means that much to me.

Everything is rather fine and dandy. Flo, no doubt mentioned about the furlough; which is just what I was looking for. It’ll probably come sometime in early December and last for 7 days. Boy! Am I looking forward to the day. I only hope and pray that nothing pops up as interference.

By the way, I’ve been taking halibut liver oil pills for nearly a week now. Maybe it’s a mental effect, but I feel like a million. We’re really double-timing and working hard. I’m in good shape, and feel as though 10 japs would have a time with me; especially if I had a mess of ammunition.

Took some “cozy” pictures; but expect most of them to be, “only an experiment.”

Hoping that all is well with Florence and Jim, who takes a good picture, by the way –
You find your soldier brother with that everlasting handshake –
BoB

P.S. Was on guard Sunday with Kenny Gardnier – he used to be the feature singer with Guy Lonbardo, which by the way, didn’t thrill me at all.