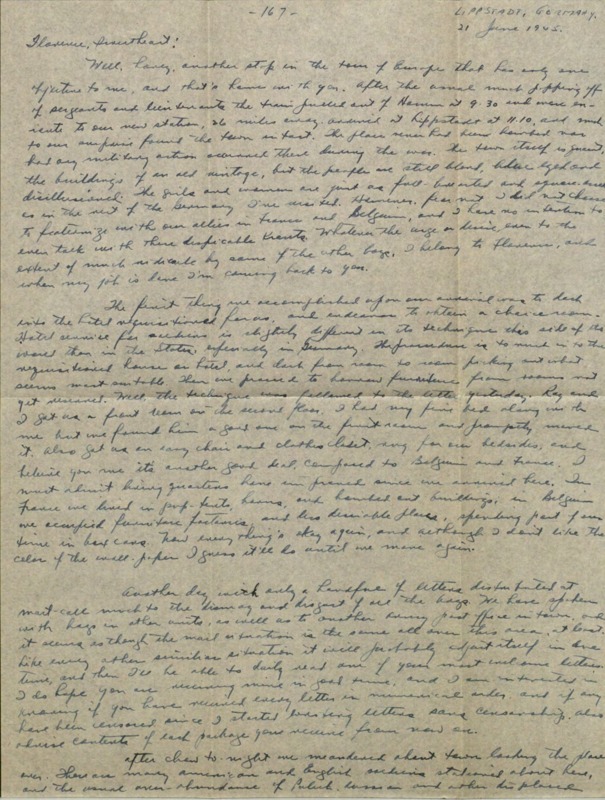 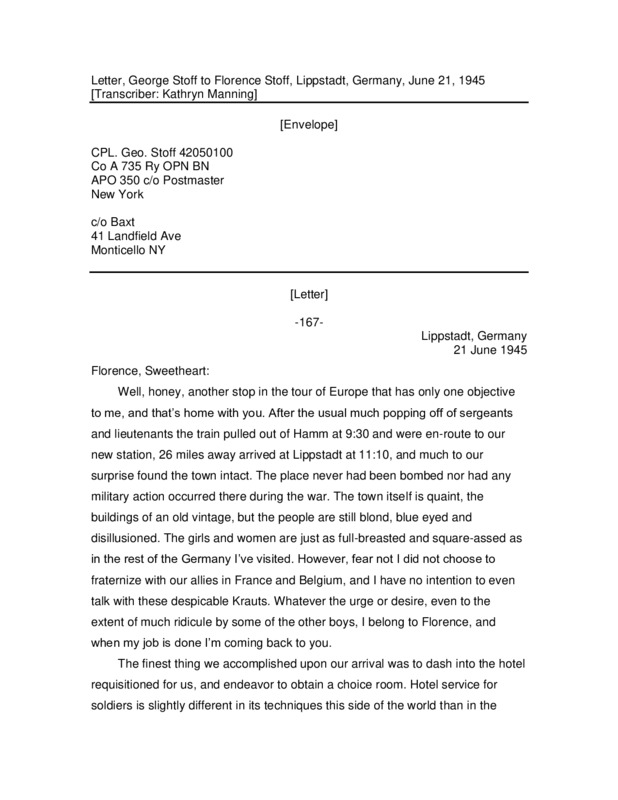 -167-
Lippstadt, Germany
21 June 1945
Florence, Sweetheart:
Well, honey, another stop in the tour of Europe that has only one objective to me, and that’s home with you. After the usual much popping off of sergeants and lieutenants the train pulled out of Hamm at 9:30 and were en-route to our new station, 26 miles away arrived at Lippstadt at 11:10, and much to our surprise found the town intact. The place never had been bombed nor had any military action occurred there during the war. The town itself is quaint, the buildings of an old vintage, but the people are still blond, blue eyed and disillusioned. The girls and women are just as full-breasted and square-assed as in the rest of the Germany I’ve visited. However, fear not I did not choose to fraternize with our allies in France and Belgium, and I have no intention to even talk with these despicable Krauts. Whatever the urge or desire, even to the extent of much ridicule by some of the other boys, I belong to Florence, and when my job is done I’m coming back to you.

The finest thing we accomplished upon our arrival was to dash into the hotel requisitioned for us, and endeavor to obtain a choice room. Hotel service for soldiers is slightly different in its techniques this side of the world than in the States, especially in Germany. The procedure is to rush in to the requisitioned house or hotel, and dash from room to room picking out what seems most suitable. Then we proceed to borrow furniture from rooms not yet reserved. Well, the technique was followed to the letter yesterday. Ray and I got us a front room on the second floor. I had my fine bed along with me but we found him a good one on the first room and promptly moved it. Also got us an easy chair and clothes closet, rug for our bedsides, and believe you me it’s another good deal, compared to Belgium and France, I must admit living quarters have improved since we arrived here. In France we lived in pop-tents, farms, and bombed out buildings; in Belgium we occupied furniture factories, and less desirable places, spending part of our time in box cars. Now everything’s okay again, and although I don’t like the color of the wall-paper I guess it’ll do until we move again.

Another day with only a handful of letters distributed at mail-call much to the dismay and disgust of all the boys. We have spoken with boys in other units, as well as to another army post office in town, and it seems as though the mail situation is the same all over this area, at least. Like every other similar situation it will probably adjust itself in due time, and then I’ll be able to daily read one of your most welcome letters. I do hope you are receiving mine in good time, and I am interested in knowing if you have received every letter in numerical order, and if any have been censored since I started writing letters sans censorship. Also advise contents of each package you receive from now on.

After chow to-night we meandered about town looking the place over. There are many American and English soldiers stationed about here, and the usual over-abundance of Polish, Russian and other displaced personnel. In addition to the town being intact there’s a lovely park along-side of a stream, and two movies. Only one of these cinema places is functioning at present, but we saw the first movie in weeks. The theatre is constructed in somewhat the style of the College, and most comfortable. We saw Margaret O’Brien, Jose Iturbi, Jimmy Durante, and June Allyson in a somewhat corny picture entitled, “Music for Millions.” The plot was putrid but the music was quite a relief from the gum-beating symphony of nit-wit sergeants.

There are several beer places in town, including one run by the army. The beer contains little alcohol and mostly is a substitute for chocolate sodas I’d prefer drinking. Two or three of them is my usual evening quota. We have also been able to obtain some German made gin on a ration basis. Mixed with grapefruit quince and sugar it is palatable, but I don’t drink much of that either. But this I promise you that on the occasion of my becoming eligible for discharge for any reason, I’m really going to throw a binge into your precious sweetheart.

I hope you and Jim are enjoying ideal weather these days, and that you are in the country by now. Please be careful driving about the country roads and watch Jimmy closely when he’s in the car on these rides. You know how wild little boys can be by now. I’m surprised he sat in the movies long enough for you to view the whole pictures but then you two don’t mind shifting seats often as a matter of fact I’m as accustomed to moving about now that I wouldn’t be surprised if I don’t carry a duffel bag all the time, even as a civilian.

It’s after 11 PM now so I guess I’ll try sleeping in my new abode. The weather was hot all day but turned cooler this evening making for good sleeping, and dreaming of you I hope. The days are long enough away from you, but with so many behind me I’m hopeful that our patience will soon be rewarded. I know this is the year, so keep smiling my precious sweetheart, stay well and be patient. Kiss the little rascal for me and I’ll kiss you both in mind. My very best to everyone.
As ever
George