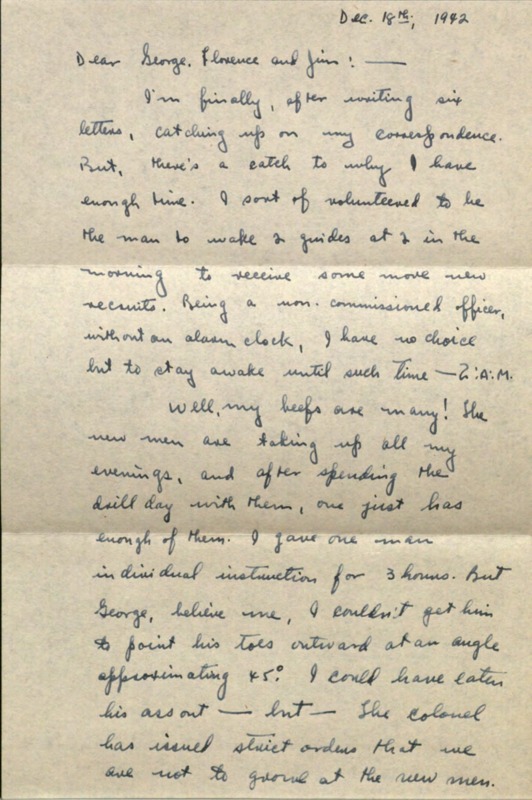 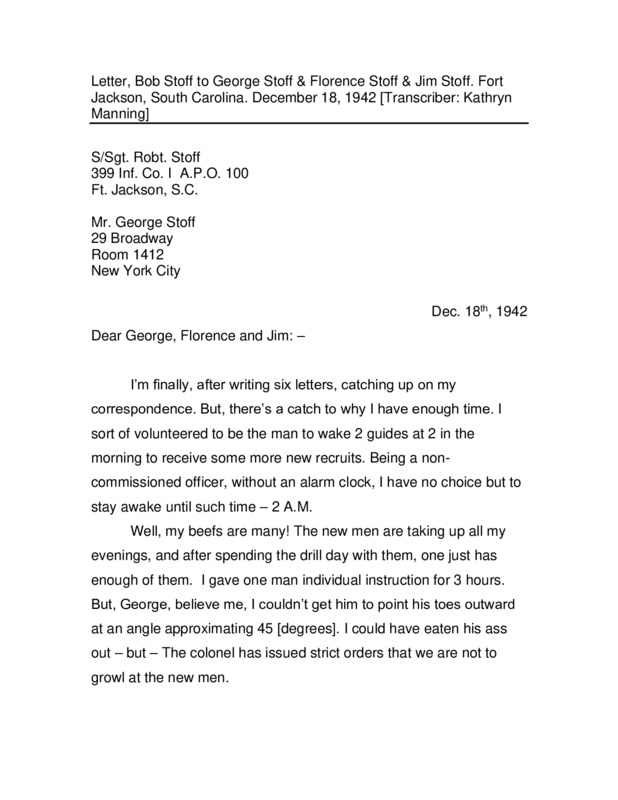 I’m finally, after writing six letters, catching up on my correspondence. But, there’s a catch to why I have enough time. I sort of volunteered to be the man to wake 2 guides at 2 in the morning to receive some more new recruits. Being a non-commissioned officer, without an alarm clock, I have no choice but to stay awake until such time – 2 A.M.

Well, my beefs are many! The new men are taking up all my evenings, and after spending the drill day with them, one just has enough of them. I gave one man individual instruction for 3 hours. But, George, believe me, I couldn’t get him to point his toes outward at an angle approximating 45 [degrees]. I could have eaten his ass out – but – The colonel has issued strict orders that we are not to growl at the new men.

This colonel, commander of the 3rd battalion, is positively nuts. It’s really a crime that anyone so ignorant should be given a commission. Frankly, he wouldn’t make P.F.C. in my platoon. He’s got everything so screwed up, and so “chicken-shit,” that everyone, including the officers and company commanders are absolutely without morale. Passes are few and bed check; which isn’t supposed to be held for the first three grades, is as strict as anything – even for the officers. The other day, I got so damn mad and mean that I really had a job controlling myself. But, in good doughboy fashion, same was accomplished.

The weather is ideal. – Ideal for colds; which are awfully prevalent. I had a slight cold during the former part of this week; but all’s well now. We even had a little snow flurry this week, intermingled with a howling rain storm.

I’m sorry that the alarm clock is causing so much trouble. I was sure that the last spot in the country to run out of clocks would be New York City – guess I was wrong.

Xmas is only a week off; but still no word of furloughs – not even passes. Am resigned to the belief that I’ll not be home, or any where near home, until I hit the next Cadre. If I ever get stuck down here with this outfit, I’ll probably go mad. I shudder to even think about such a calamity.

With the hope that everything is in good order, I leave you

With a handshake —
BoB