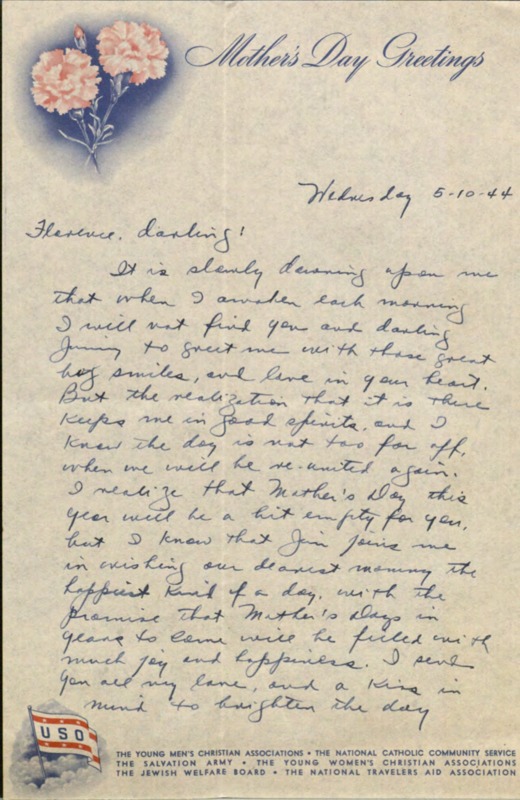 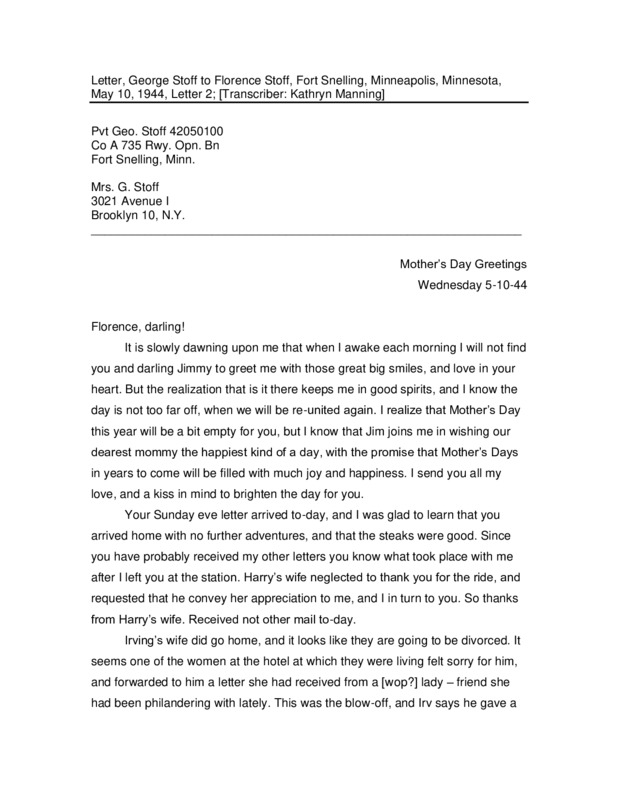 Florence, darling!
It is slowly dawning upon me that when I awake each morning I will not find you and darling Jimmy to greet me with those great big smiles, and love in your heart. But the realization that it is there keeps me in good spirits, and I know the day is not too far off, when we will be re-united again. I realize that Mother’s Day this year will be a bit empty for you, but I know that Jim joins me in wishing our dearest mommy the happiest kind of a day, with the promise that Mother’s Days in years to come will be filled with much joy and happiness. I send you all my love, and a kiss in mind to brighten the day for you.

Your Sunday eve letter arrived to-day, and I was glad to learn that you arrived home with no further adventures, and that the steaks were good. Since you have probably received my other letters you know what took place with me after I left you at the station. Harry’s wife neglected to thank you for the ride, and requested that he convey her appreciation to me, and I in turn to you. So thanks from Harry’s wife. Received no other mail to-day.

Irving’s wife did go home, and it looks like they are going to be divorced. It seems one of the women at the hotel at which they were living felt sorry for him, and forwarded to him a letter she had received from a wop lady – friend she had been philandering with lately. This was the blow-off, and Irv says he gave a burst in the nose, and told her off. I don’t believe he smacked but it was a good idea. In any event they are finished, and the comedy is ended. As I dwell on his problem I am of the opinion he married the chicken-market and the real estate, and got stuck with baloney. He says he is now quite relieved that it is all over, and already has found a very nice Jewish girl whom he raves about, but refuses to let me meet her. Captain Milquetoast Goldberg sure has become brave since he got into the uniform of a soldier.

Have not heard from Bob, and I hope all is well with him. I wrote Billy about the camera, and you speak of Don or Bill about ways and means of returning the same.

I hope there have been no repercussions because of our rushing away from the cemetery so quickly on Sunday. I sure would hate for anyone to attempt to call you down for that. I wrote Jules and attempted to explain the cause for our absence on Sunday when he probably phoned.

We had pretty good chow to-day, fried eggs for breakfast, pork chops and pie for lunch, and roast chicken and stuffing for supper, but I sure do miss you all the time. Weather has been cool and it rained part of to-day. I feel fine and dandy, and hope that you and Jim are as well as I left you. I presume you have taken him in hand since I left, and that he is being a good boy.

Stay well, my precious ones, don’t worry, and I love you.
As ever,
George