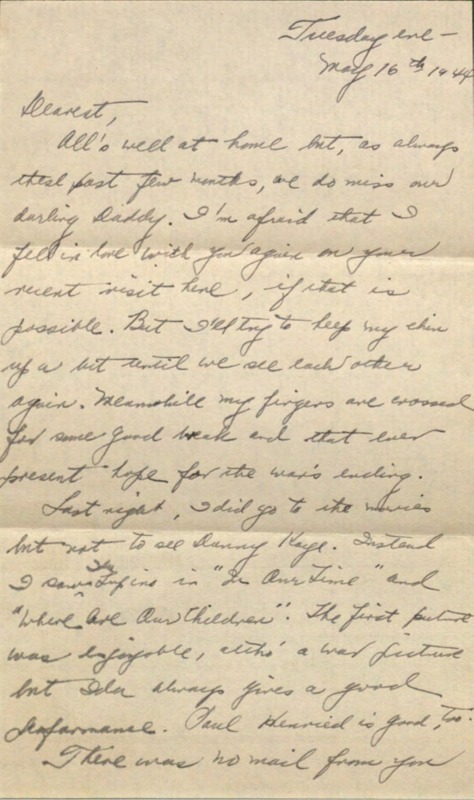 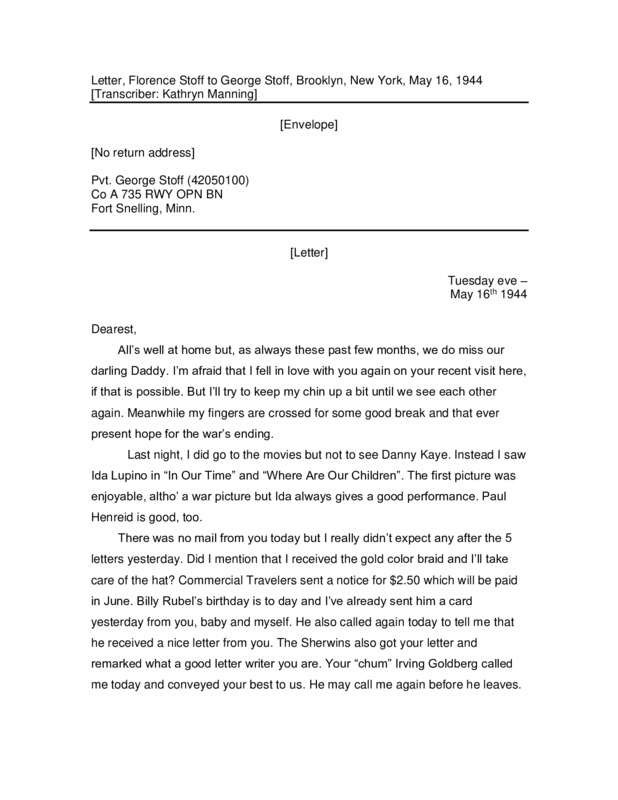 Dearest,
All’s well at home but, as always these past few months, we do miss our darling Daddy. I’m afraid that I fell in love with you again on your recent visit here, if that is possible. But I’ll try to keep my chin up a bit until we see each other again. Meanwhile my fingers are crossed for some good break and that ever present hope for the war’s ending.

Last night, I did go to the movies but not to see Danny Kaye. Instead I saw Ida Lupino in “In Our Time” and “Where Are Our Children”. The first picture was enjoyable, altho’ a war picture but Ida always gives a good performance. Paul Henreid is good, too.

There was no mail from you today but I really didn’t expect any after the 5 letters yesterday. Did I mention that I received the gold color braid and I’ll take care of the hat? Commercial Travelers sent a notice for $2.50 which will be paid in June. Billy Rubel’s birthday is to day and I’ve already sent him a card yesterday from you, baby and myself. He also called again today to tell me that he received a nice letter from you. The Sherwins also got your letter and remarked what a good letter writer you are. Your “chum” Irving Goldberg called me today and conveyed your best to us. He may call me again before he leaves. Spoke to the folks again today, they’re well and had a nice letter from Bob, who writes all about the beautiful country and scenery in Las Vegas.

The weather was finally nice to-day, cloudy in the morning but sunny and slightly breezy in the afternoon. We did get out after lunch and again spent the afternoon at Vanderveer Park. Baby just loves the wide, open spaces and I don’t have to run after him too often. A woman, sitting near me, told me that her son was just sent to Italy and she had a slight case of the blues. I think she was Jewish and her boy was just 18. Jimmie managed to make her smile and she warmed up to him quickly.

Joel is still the same, still at the hospital and I’ll try my best to see him to-morrow afternoon. Spoke to Eleanor, who’s busy with a garden in back of the store and it looks like we’ll have vegetables this season – garden variety.

Bess left for the country on Saturday and I’ll drop her a letter this week.

Did you have a nice time at that picnic? Is it possible to have another photograph taken (for free) at some Minn. Department store? Might as well take it all in. I also found those “snaps” in the breakfront.

Good-night, my darling and all the love that’s in my heart. Keep well and remember, I love you dearly. A hug and kiss from Jimmie.
As ever,
Florence