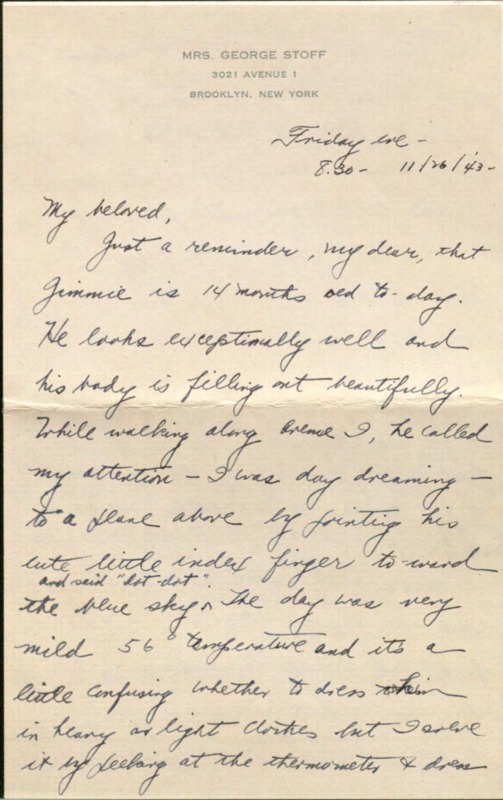 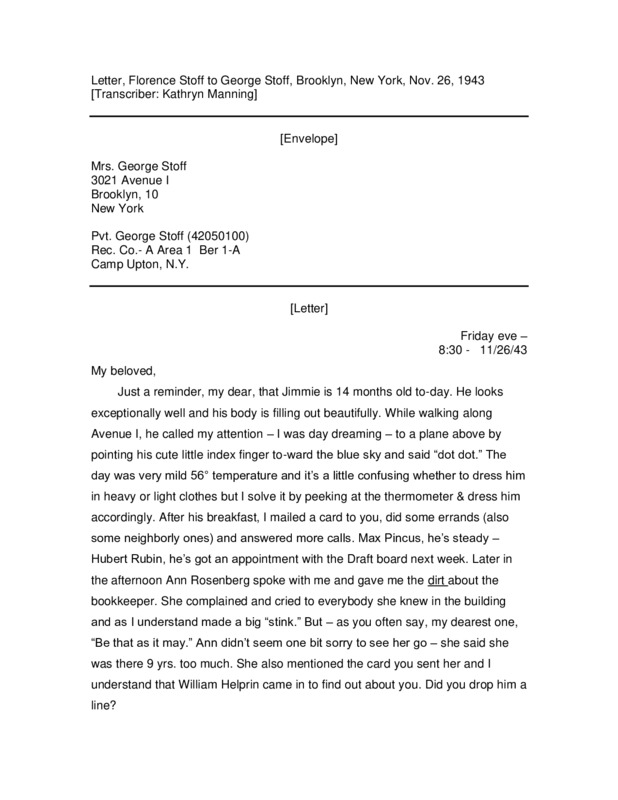 My beloved,
Just a reminder, my dear, that Jimmie is 14 months old to-day. He looks exceptionally well and his body is filling out beautifully. While walking along Avenue I, he called my attention – I was day dreaming – to a plane above by pointing his cute little index finger to-ward the blue sky and said “dot dot.” The day was very mild 56° temperature and it’s a little confusing whether to dress him in heavy or light clothes but I solve it by peeking at the thermometer & dress him accordingly. After his breakfast, I mailed a card to you, did some errands (also some neighborly ones) and answered more calls. Max Pincus, he’s steady – Hubert Rubin, he’s got an appointment with the Draft board next week. Later in the afternoon Ann Rosenberg spoke with me and gave me the dirt about the bookkeeper. She complained and cried to everybody she knew in the building and as I understand made a big “stink.” But – as you often say, my dearest one, “Be that as it may.” Ann didn’t seem one bit sorry to see her go – she said she was there 9 yrs. too much. She also mentioned the card you sent her and I understand that William Helprin came in to find out about you. Did you drop him a line?

The letter I received from Bob this morn. relates how much better he likes the old army life again, the better food and not too much “chicken.” He’s restricted to the area for 14 days but he could take it. His first letter I answered yesterday and I’ll try to answer to-days letter over the week-end.

Mom and Pop are well, Mom spoke with me early this eve and they both had a nice Thanksgiving – but they also missed you and Bob an awful lot - But perhaps we’ll all have dinner to-gether again real soon from all the news we hear around. Do you hear those same rumors?

I’ll try to take some more snaps of baby and me to-morrow – and Sunday – if the weather permits. About the Prestone – I keep asking Arty & Allen almost daily for it but there seems to be none as yet. It’s on order they say. So in a few days, if I can’t get it I’ll have some other fluid put in. The car is in good condition. Anything you want dear?

Is the food getting better? Do find the new life as it was described – or is it worse?

All are well on both home fronts. Dan just called – got a swell letter from you and sends his best regards from all the Eidlers.

Again and again I repeat – I love you so much. Jimmie sends a great big hug and kiss.
Love,
Florence