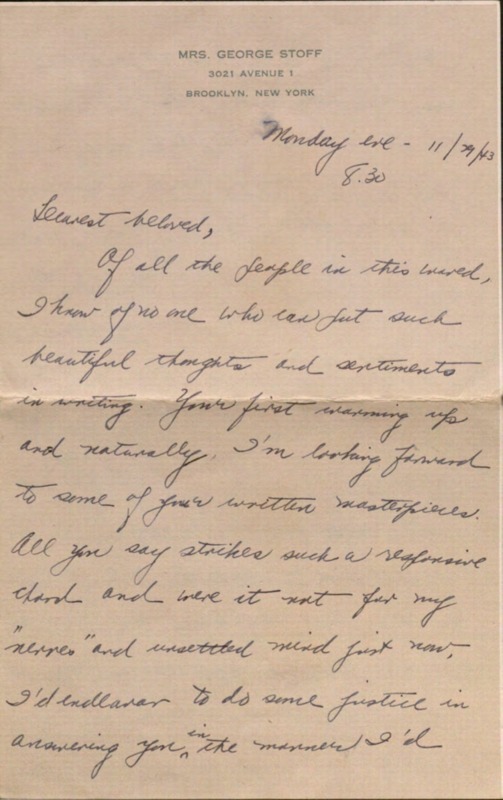 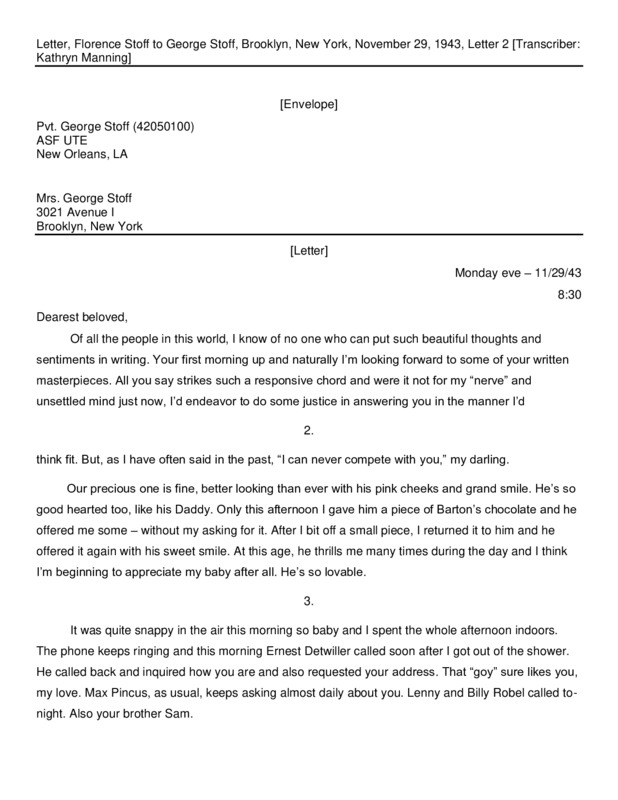 Dearest beloved,
Of all the people in this world, I know of no one who can put such beautiful thoughts and sentiments in writing. Your first morning up and naturally I’m looking forward to some of your written masterpieces. All you say strikes such a responsive chord and were it not for my “nerve” and unsettled mind just now, I’d endeavor to do some justice in answering you in the manner I’d think fit. But, as I have often said in the past, “I can never compete with you,” my darling.

Our precious one is fine, better looking than ever with his pink cheeks and grand smile. He’s so good hearted too, like his Daddy. Only this afternoon I gave him a piece of Barton’s chocolate and he offered me some – without my asking for it. After I bit off a small piece, I returned it to him and he offered it again with his sweet smile. At this age, he thrills me many times during the day and I think I’m beginning to appreciate my baby after all. He’s so lovable.

It was quite snappy in the air this morning so baby and I spent the whole afternoon indoors. The phone keeps ringing and this morning Ernest Detwiller called soon after I got out of the shower. He called back and inquired how you are and also requested your address. That “goy” sure likes you, my love. Max Pincus, as usual, keeps asking almost daily about you. Lenny and Billy Robel called to-night. Also your brother Sam.

Late this afternoon I called the store and spoke with your Mother. She’s well and so is Pop. They received your picture as did your wife. It isn’t the best picture of you, my darling and I do think you should have another taken standing up, with your head facing the right like your good photos. You are handsome, you know, and I only want a picture that does you justice. I cut this “ad” out of the “News” and being that it’s “for free” you might to take advantage, if possible. The uniform fits nicely and your collar and tie are just so.

Your Jimmie is having his request granted. Mommy is now baking a sponge cake for the little darling. I hope it turns out good. Do you smell it?

Until the morrow, I bid you good-night, sweetheart. All my love to you.

As ever,
Florence
P.S. Mom & Pop send their best.
Thanks for the photos.