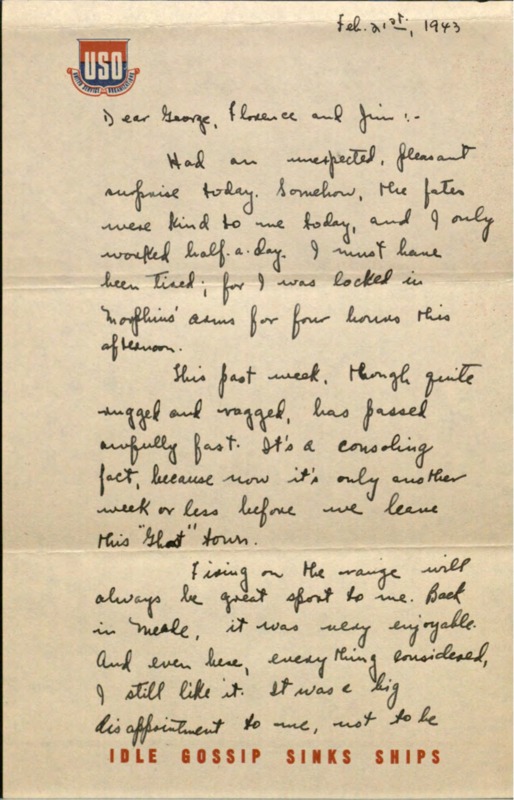 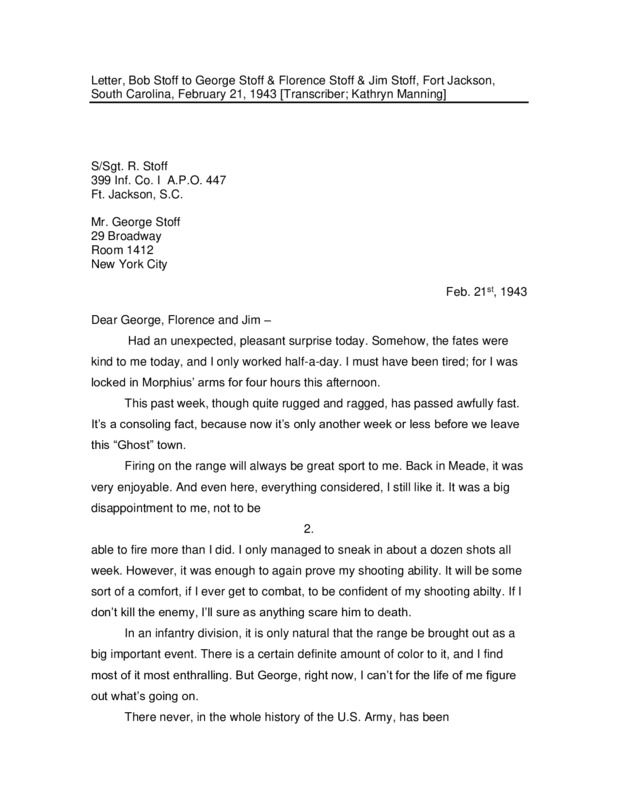 Dear George, Florence and Jim –
Had an unexpected, pleasant surprise today. Somehow, the fates were kind to me today, and I only worked half-a-day. I must have been tired; for I was locked in Morphius’ arms for four hours this afternoon.

This past week, though quite rugged and ragged, has passed awfully fast. It’s a consoling fact, because now it’s only another week or less before we leave this “Ghost” town.

Firing on the range will always be great sport to me. Back in Meade, it was very enjoyable. And even here, everything considered, I still like it. It was a big disappointment to me, not to be able to fire more than I did. I only managed to sneak in about a dozen shots all week. However, it was enough to again prove my shooting ability. It will be some sort of a comfort, if I ever get to combat, to be confident of my shooting ability. If I don’t kill the enemy, I’ll sure as anything scare him to death.

In an infantry division, it is only natural that the range be brought out as a big important event. There is a certain definite amount of color to it, and I find most of it most enthralling. But George, right now, I can’t for the life of me figure out what’s going on.

There never, in the whole history of the U.S. Army, has been a company, much less, a battalion that qualified all their men on the range. But here, the whole regiment qualified. That would be swell – why, going to combat with such a shooting outfit is better than the reverse.

Sure, a regiment of shooting riflemen could knock over a whole division, and I mean that. But George, you never saw anything like the farce this has turned out to be. You see, every firer has a man coach him while he’s firing. Well, that’s what the cadre has been doing the last four days or so. Naturally, we’ve the finest coaches you can get. George, we did everything but squeeze their shots off. Besides, the men who were marking the targets, were instructed to make sure the men qualified. Rapid fire is supposed to be done in sixty seconds – the men were given all the time they needed. Sometimes as high as fifteen minutes. Well, to make a long story short, everybody qualified, and high too. There isn’t one “holo” in the whole regiment. All this was the regimental commander’s (a colonel) idea. It’s a very impressive showing, especially in Washington. But George, it’s bad when you think of this outfit on a comparison basis. A high shooting outfit like this rates high for combat duty. It’s really unfair to all these men. The colonel wants a star on his shoulders, and it seems he doesn’t care how he makes it. It’s bad business George --

Everything else is fine and dandy. I’m still good and healthy; but good and disgusted too. That furlough, just as I had expected, makes me want to get of here and the army as soon as possible. At least, if I have to be in the army, do I wish I could get with a decent outfit.

Really, it’s no difference. I guess I just want to get of all this. In any event George, I’m going to take advantage of the money I can save while I’m in the army. I’m going to try to send fifty dollars home every month. You can hold me to it this time.

Haven’t heard from you as often as I’d like to; but I know how busy you are. Please advise me what I’m to do about my income tax –

Hope you’re all fine and dandy, and getting enough heat during this cold spell –
With that warm handshake in mind ----
BoB