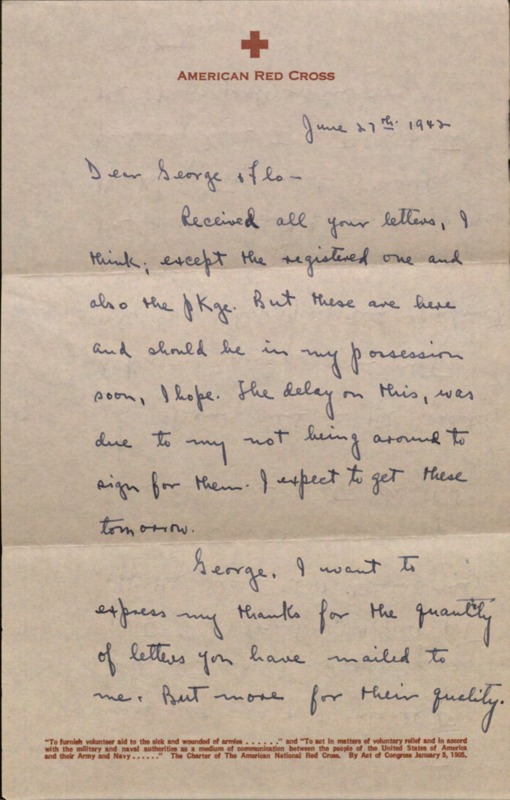 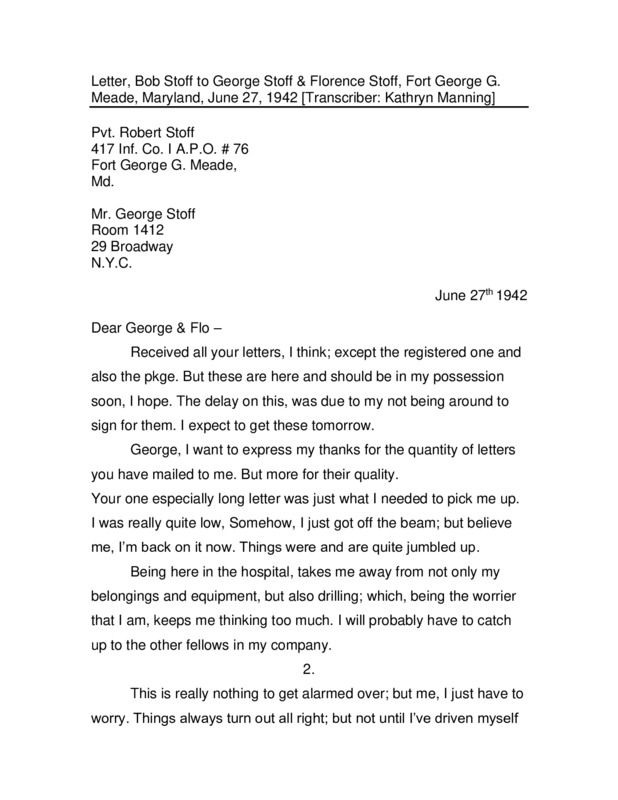 Dear George & Flo –
Received all your letters, I think; except the registered one and also the pkge. But these are here and should be in my possession soon, I hope. The delay on this, was due to my not being around to sign for them. I expect to get these tomorrow.

George, I want to express my thanks for the quantity of letters you have mailed to me. But more for their quality. Your one especially long letter was just what I needed to pick me up. I was really quite low, Somehow, I just got off the beam; but believe me, I’m back on it now. Things were and are quite jumbled up.

Being here in the hospital, takes me away from not only my belongings and equipment, but also drilling; which, being the worrier that I am, keeps me thinking too much. I will probably have to catch up to the other fellows in my company.

This is really nothing to get alarmed over; but me, I just have to worry. Things always turn out all right; but not until I’ve driven myself nuts worrying over them. I want to reiterate though, I’ve calmed down to the extent that once again I’m just normal. The only trouble now, is this hospital business. I’d rather be back drilling; but one is kept in deep mystery here. However, I think the doctors have decided to send me back to duty very soon.

So far, the doctors have accomplished nothing. Not that they’ve tried very much. But what can anyone do for my condition. They gave [me?] several vision tests, and the results were startling. The first time I read 20/20. The 2nd time, I was given a refraction test. Before you get this, you are given 5 sets of eye drops. This makes you practically blind; especially at a distance of 6 inches to 1 and a half feet. But when I realized this was a test to determine what strength glasses you are to be given, I told the doctor (unfamiliar with my case) that a mistake must have been made. For I was sure that I didn’t require glasses. So, after testing me for astigmatism, he let me read the chart at my request. With these blinding drops still in my eyes, I read 20/15; which caused quite a commotion in the eye clinic. Never before had anyone done it. By the way, I wasn’t given glasses.

Yesterday, I was given 18 allergy tests, all foods. But I’m afraid this proved absolutely nothing. If I’m still in the hospital, I’m to get more tests taken next Tuesday; but I’ve a hunch that I won’t be here that long. Something tells me, I’ll be let out tomorrow.

It is still hard for me to advise you about the week end pass situation. It is all up to the company commanding officer. Some companies have passes for half their men every week, the other men getting theirs the following week. So, I’m keeping my fingers crossed.

Fran has written me about 15 letters; which helps me to keep my chin up. She wants to come down here in the worst way. So if you ever drive down, I’d really appreciate your taking her.

Glad to learn that Florence is getting along well. –
With a double handshake in mind –
BoB